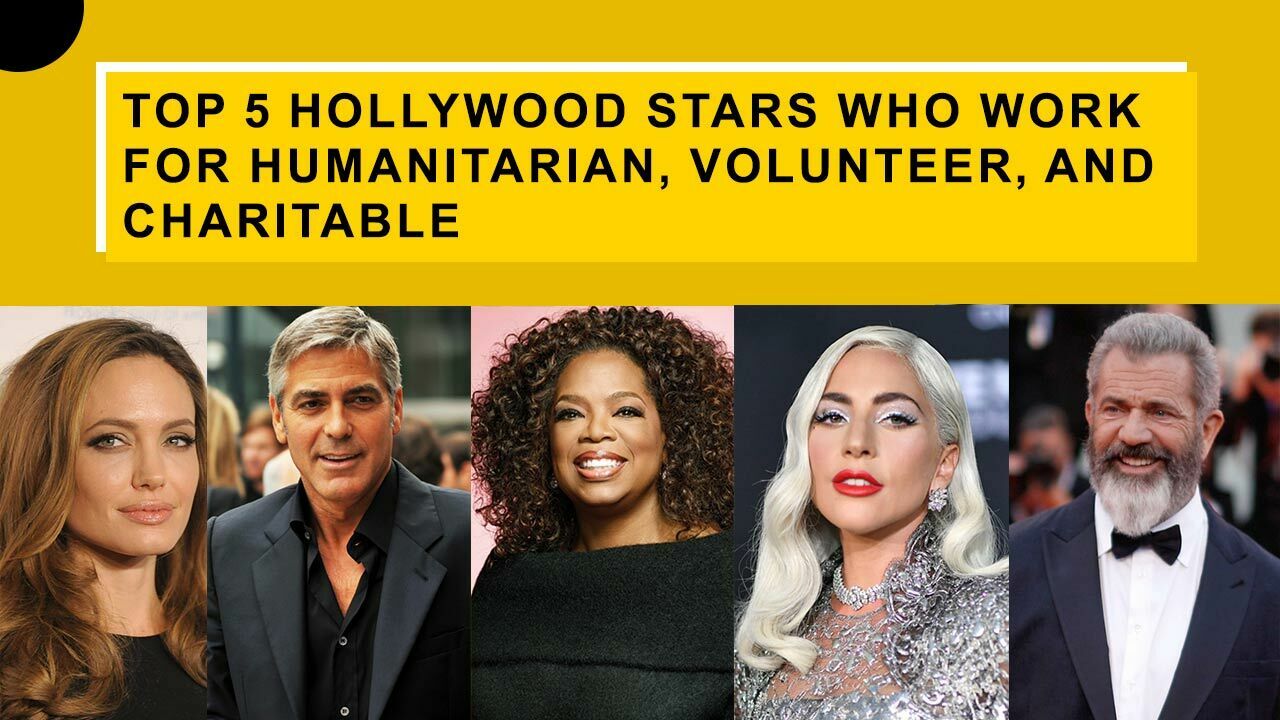 Almost no one is as wealthy as those who are well-known in Hollywood. They earn more from each film than the majority of us will in our whole lifetimes. The average person’s yearly salary can be made from only one appearance on television. With all of that money going to the top 1%, it’s amazing that organizations even need to raise money. When it comes to philanthropic causes, some wealthy people—including famous people—are exceedingly giving, and their generosity has improved lives all around the world.

Angelina Jolie, an American actress, director, and humanitarian, was raised in a Hollywood family as the daughter of actor Jon Voight. She then went on to win an academy award and rank among the most paid actresses in the industry. From 2014 to 2016, she was married to the actor Brad Pitt, and a large portion of her most recent grantmaking is similar to his. Jolie cites her mother, who passed away in 2007, as the source of her motivation to pursue a career in philanthropy. The Fifth Annual Governor’s Awards presented Jolie with the esteemed Jean Hersholt Humanitarian Award.

The Jolie-Pitt Foundation, which places a strong emphasis on conservation, sustainable development, and the advancement of health and education, is where Angelina Jolie makes her grants. Additionally, she is in favor of the Cambodian Maddox Jolie-Pitt Project.

Since 2011, Angeline has been working with the United Nations. It all began following the release of her film Tomb Raider, which was shot in ravaged Cambodia. This was the catalyst for her renowned study on human disasters. Miss Jolie visited the UN to aid displaced persons and refugees. In addition to many others, she has worked for Tunisia, Pakistan, Iraq, Egypt, Sri Lanka, Costa Rica, India, and Syria. However, the majority of his work is focused on Muslim-dominated nations that are experiencing an internal or external human crisis. Jolie donated $1 million in 2020 to No Kid Hungry, an organization that feeds kids from low-income households. Top 5 Hollywood Humanitarian Celebrities

Why are Brad Pitt and Angelina fighting?

Angelina Jolie is accused of damaging the reputation of the company by Brad Pitt, who sues her for selling her share in the wine industry.

Pitt filed a lawsuit against his ex-wife in February 2022 after Jolie sold her share of Château Miraval in 2021, alleging that she had broken a previous contract.

Pitt claimed that Jolie did not acquire his consent before selling her shares to the Stoli Group, despite their agreement that neither would do so without the other’s consent, according to legal documents obtained by PEOPLE.
Pitt continued to accuse Jolie of harming the reputation of the wine industry by selling her shares to a “stranger” in a fresh court petition on June 6, 2022. The Lost City actor alleged that by selling her share of the company, Jolie “sought to inflict injury on” him on purpose.

Who hasn’t heard of George Clooney? He was every girl’s, first love. The Hollywood superstar actor is a well-known political and humanitarian activist.  Despite coming from a show business family, Clooney originally wanted to play baseball.  E.R., a drama, gave him his first significant role. He made his cinematic debut from that show and shot to stardom.

In 2016, George and Amal Clooney co-founded the non-profit Clooney Foundation for Justice, which aims to improve schools, neighbourhoods, and courtrooms around the world. Clooney is well recognized for his efforts to halt mass atrocities and genocide in Sudan and South Sudan, where he has gone regularly, initially through Not on Our Watch (folded into The Sentry in February 2019).  George Clooney also, founded “Not on My Watch” with the help of some of his renowned friends from the entertainment industry, including Brad Pitt and Matt Damon.

The Clooney Foundation for Justice (CFJ), which promotes justice through accountability for human rights abuses around the world, was co-founded by George and Amal Clooney in late 2016. Its major initiatives include The Sentry, TrialWatch, and The Docket. CFJ supports a programme that gives out-of-school children in Lebanon, including Syrian refugees, an opportunity to return to school.

The Radcliffe Foundation and Google.org are participants in this programme. Additionally, CFJ is establishing its TrialWatch project, a programme aimed at monitoring, documenting, and responding to trials with a high potential for human rights breaches throughout the world. Additionally, CFJ has supported the resettlement of Yazidi and Syrian refugees in the United States and intends to do so in the future. Top 5 Hollywood Humanitarian Celebrities

Who was george clooney’s first wife?

He has been nominated for eight Academy Awards over his career, taking home two of them—Best Supporting Actor for Syriana (2005) and Co-Producer of Best Picture winner Argo (2012).

American talk show host, television producer, actor, author, and philanthropist Oprah Gail Winfrey, is best known for her talk show, The Oprah Winfrey Show, Winfrey was raised by a single, impoverished mother in Mississippi. Oprah serves as Chairwoman and CEO of Harpo Productions and Chairwoman, CEO and CCO of the Oprah Winfrey Network.

Winfrey’s dedication to philanthropy is a testament to her commitment to her philosophy of “intent and service.” Oprah founded her own nonprofit, Oprah’s Angel Network, in 1998. Oprah paid all operating expenses for Oprah’s Angel Network out of her own pocket because she wanted to ensure that all donations went entirely to charitable causes. Prior to ceasing to accept donations and ultimately dissolving, the group had amassed over $80 million by 2010.

Scholarships are offered through the Oprah Winfrey Scholars Program to people who want to give back to their communities. It was predicted that she had given away nearly $400 million for educational causes by the year 2012. Oprah continues to make contributions to education. Additionally, she has given Morehouse College in Atlanta, Georgia, more than 400 scholarships. Winfrey gave the National Museum of African American History and Culture $12 million in 2013, and President Obama later awarded her the Presidential Medal of Freedom in recognition of her achievements. Top 5 Hollywood Humanitarian Celebrities

Lady Gaga, a two-time Grammy winner, singer, musician, and fashion designer, is a resourceful “win-win” philanthropist who lends the weight of her notoriety to charitable endeavors. She is indeed a benevolent philanthropist. Born into an Italian American family in New York City, she studied at Tisch for two years before leaving to run her own career because she had always been interested in music.

Lady Gaga and her mother Cynthia Germanotta-founded “Born This Way Foundation” to promote young people’s mental wellness. She has explored a variety of charity endeavors since she first gained notoriety in an effort to support the idea of a kinder and safer society. She already has a well-established reputation for her unwavering support of the homosexual and LGBT communities, which is another factor in why she has amassed such a devoted and devoted fan base.

The Born This Way Foundation declared that they would contribute $250,000 to help and support kids’ mental health needs all throughout the country. Through a global broadcasting event, Gaga raised $127.9 million in 2020 in partnership with WHO and Global Citizen. During the month of January 2010, she also donated $500,000 to the Haiti earthquake survivors by selling tickets for her Monster Ball Tour. She has also taken great initiative in educating young women about the risk of HIV/AIDS. Top 5 Hollywood Humanitarian Celebrities

American actor, director, and producer Mel Gibson is also a devoted philanthropist. He is one of the most well-liked figures in the entertainment business, and is renowned for his flawless acting and directing abilities. Mel Gibson was given a 10-minute standing ovation in 2016 at the Venice Film Festival when “Hacksaw Ridge” had its world debut. The movie, which had a rousing reception in Italy, went on to earn six Oscar nominations.

Mel Gibson $10 million was donated to hospitals to cover the costs of treating very ill children who were unable to receive care in their home countries owing to a lack of funds or resources.

Gibson contributed $50000 to FARES’s efforts at Mirador in 2005; he currently sits on the foundation’s board and is an advocate for the project to save the rainforest. It’s amazing that Mel Gibson is assisting Holocaust survivors in eight different nations. Top 5 Hollywood Humanitarian Celebrities

We strive for accuracy and fairness. If you see something that doesn’t look right, email us at support@goodpeoplestories.com